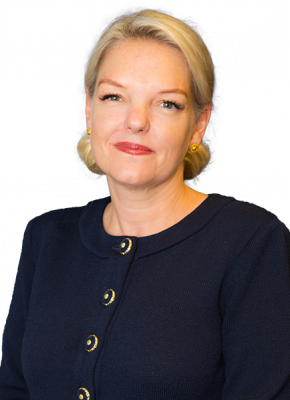 Amy Hillman has over 20 years of experience representing clients in real estate development and finance.  She is proactive and strategic in considering the business needs and goals of her clients.  Amy is a trusted “deal architect” who handles all facets of complex commercial real estate transactions, including acquisition, finance, sale, leasing, ground leasing and zoning.

Amy is a skilled negotiator who focuses on the business and legal issues that matter most to her clients, while working collaboratively to bring deals to a successful close.  Her clients include medical providers, commercial real estate owners, medical office and office developers and real estate investment trusts. Amy’s deal-focused and results-oriented approach drives her practice philosophy and enables her to achieve superior results for her clients.

Amy is active in community and civic affairs. She is a graduate of Leadership Forsyth (2000) and Leadership DeKalb (2003). She has volunteered with the Georgia High School Mock Trial Program, serving as an attorney coach for North Forsyth High School (2000) and for Grady High School (2001 and 2002). She has been invited to speak on topics related to her legal practice before various groups including the Georgia Planning Association (“Thinking Outside the Big Box” — Offering a Developer’s and Retailer’s perspective, 2005); section members of the Louisiana Bar Association (Developments in the Tort of Medical Monitoring, 2001); Georgia CLE classes (“Landlord Tenant Law A to Z” (2008) and Landlord and Tenant Law (2012, 2013, 2014); the National Association of Women Lawyers (2009); the Georgia State Bar Diversity Panel (2009); and the Georgia Association of Women Lawyers Leadership Academy (on leadership and mentoring (2010)). Amy co-authored a letter published by the American Bar Association, Commission on Women in the Profession, in The Road to Independence (ABA, 2011).

Amy is an adjunct professor at Emory University School of Law, Atlanta, Georgia. Amy also serves as Vice Chair of the Board of Directors for the Georgia Department of Natural Resources Foundation.

Amy is an active volunteer for Immaculate Heart of Mary Catholic School and the Buckhead Forest Civic Association.

This website uses cookies to improve your experience while you navigate through the website. Out of these cookies, the cookies that are categorized as necessary are stored on your browser as they are essential for the working of basic functionalities of the website. We also use third-party cookies that help us analyze and understand how you use this website. These cookies will be stored in your browser only with your consent. You also have the option to opt-out of these cookies. But opting out of some of these cookies may have an effect on your browsing experience.
Necessary Always Enabled
Necessary cookies are absolutely essential for the website to function properly. This category only includes cookies that ensures basic functionalities and security features of the website. These cookies do not store any personal information.
Non-necessary
Any cookies that may not be particularly necessary for the website to function and is used specifically to collect user personal data via analytics, ads, other embedded contents are termed as non-necessary cookies. It is mandatory to procure user consent prior to running these cookies on your website.
SAVE & ACCEPT